Acrylic and oil on canvas

Asit Patnaik has been working on the Relations series for quite some time now. It will be interesting, therefore, to explore the kind of selves articulated into the batch of works on the Relations series. To begin with, it is informed by a great deal of individuation..Intriguingly, the woman figure appears to claim greater attention in the new set of works. Critics and viewers have identified it as a salient feature in Patnaik’s work. As the painter once, it may well have stemmed from a subconscious impulse. He had once attributed it to a deep admiration for his mother, who had boldly taken charge of the family after his father’s premature death. It may have something to do also with his belief that women have the resilience to face any adversity, with their unique calibration of vulnerability and strength. The woman in this series is bold, colourful and forthright. She is ready to face any challenge, even as she celebrates her very existence. The thoughtful, pensive and introspective self for once is matched by an abandon and courage that calls for a direct engagement. The greys in the frame are often overwritten by bold colours. The man and the woman now wear deeply coloured selves. The cohabitation of depth and colour appear to call forth a great deal of passion, intensity and vigour. Their strength is no longer implicit, but confidently visible, even if retrained. It is this easy shuffle between the obviously full blooded and the carefully controlled that makes these works some of the most mature in Patnaik’s oeuvre. 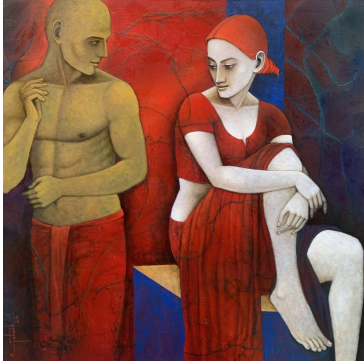